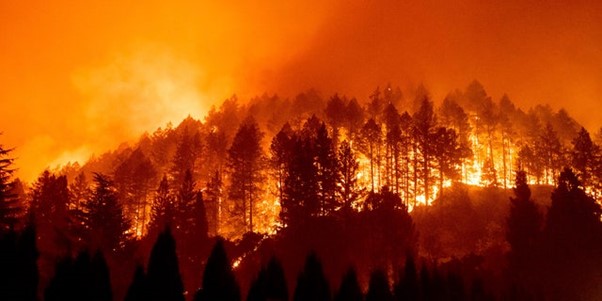 The Caldor fire that started on August 14 between Omo Ranch and Grizzly Flats, near the Middle Fork of the Cosumnes River, has been expanding rapidly with no containment. It initially burned slowly but exploded in size on August 16 due to high winds. By the night of August 16, it was 6,500 acres. On August 17 the fire grew to 30,000 acres as it expanded rapidly north and east, crossing the North Fork Cosumnes River and approaching Sly Park Reservoir. As of August 18, 2021, it had burned more than 62,500 acres with no containment. The National Weather Service issued red-flag warnings in the region, extending across several western states, noting the potential for the rapid spread of fire with a perilous trifecta of low humidity, extremely dry vegetation, and dry wind gusts of up to 35mph. Meanwhile, Pacific Gas & Electric announced it had begun shutting off power to some 51,000 customers in small portions of 18 northern counties to prevent winds from knocking down or fouling power lines and sparking new blazes. On August 17 evacuations were ordered for Grizzly Flats, Somerset, Sly Park Reservoir, and Pollock Pines. Additionally, governor Gavin Newsom declared a state of emergency for El Dorado County on the same day. The fire grew 24 times in a span of just two days, forcing another 10,000 residents to evacuate. To protect people from that dire situation, the number of those evacuated in El Dorado County jumped to 16,380 on 18th August, up from about 6,850 the day prior, according to the Governor’s Office of Emergency Services. Damage assessment has not yet begun as the fire remains dynamic and complex, officials said. So far, the fire has destroyed many structures and threatens roughly 6,000 others, Cal Fire officials said. The fire burned at least one elementary school in the Pioneer Union School District, one community church, and one post office. Apart from this, more than 25,000 firefighters are battling 104 large wildfires. The US is working to tame 104 large fires currently burning, mostly in the west, where drought conditions and red flag warnings continue to fuel the flames, according to the National Interagency Fire Center. The Dixie Fire — the nation’s largest active fire — has destroyed more than 1,200 structures, including 645 single residences, Cal Fire said. At least 16,085 structures are still threatened by the flames. Three first responders have been injured fighting the fire, according to officials.

Chauvin guilty of murder and manslaughter in Floyd’s death On May 25, 2020, Floyd was murdered by Derek  Chauvin, a white Minneapolis police officer, who ... Read More

Mayor Keisha Lance Bottoms issued an Executive Order requiring all persons in a public place, including private businesses and establishments, to wear a mask or ... Read More